Whether you bake your own bread or buy it from the bakery this is a fantastic idea for keeping it lovely and fresh!

Dans le sac was founded in 2016 by two 20-something friends – one who was in the habit of taking a pillowcase to the corner bakery to pick up bread! They decided they needed something to use that looked better than the pillowcase but could find nothing on the market so they went to Montreal’s famous Rue Chabanel to buy fabric and began producing the prototype of what is now their reusable bread bag.

Dans le sac’s goal is to encourage people to reduce their consumption and dependence on plastic out of a concern for both the environment and their health. They believe every action counts and can even have a significant impact. The bags are now made just outside Montreal, Canada, using US grown and woven cotton canvas.

The Dans le sac bread bags are designed to transport bread home from the bakery and to store the bread at home – the traditional method of storing bread. The thick cotton fabric allows an air exchange which not only prevents the bread from growing mould but it also creates a barrier from any drafts which would dry it up. For best results the bags should be sealed as tightly as possible – simply roll over the top so that it is as tight as possible then pass the ribbon around and tie it. Bread can be frozen directly in the bag but the bag must be closed as tightly as possible.

The Dans le sac bags are machine-washable in cold water with a gentle detergent and no fabric softener, however the less the bag is washed the better. Simply shake out any crumbs and reuse. Not recommended in the dryer. A shrinkage of 10% on the height of the bag is to be expected after the first wash.

There are no reviews yet.

This site uses Akismet to reduce spam. Learn how your comment data is processed. 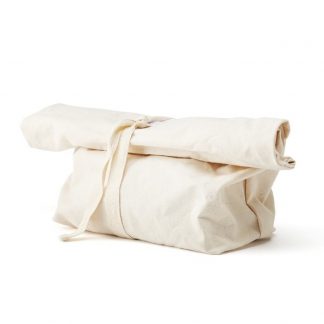